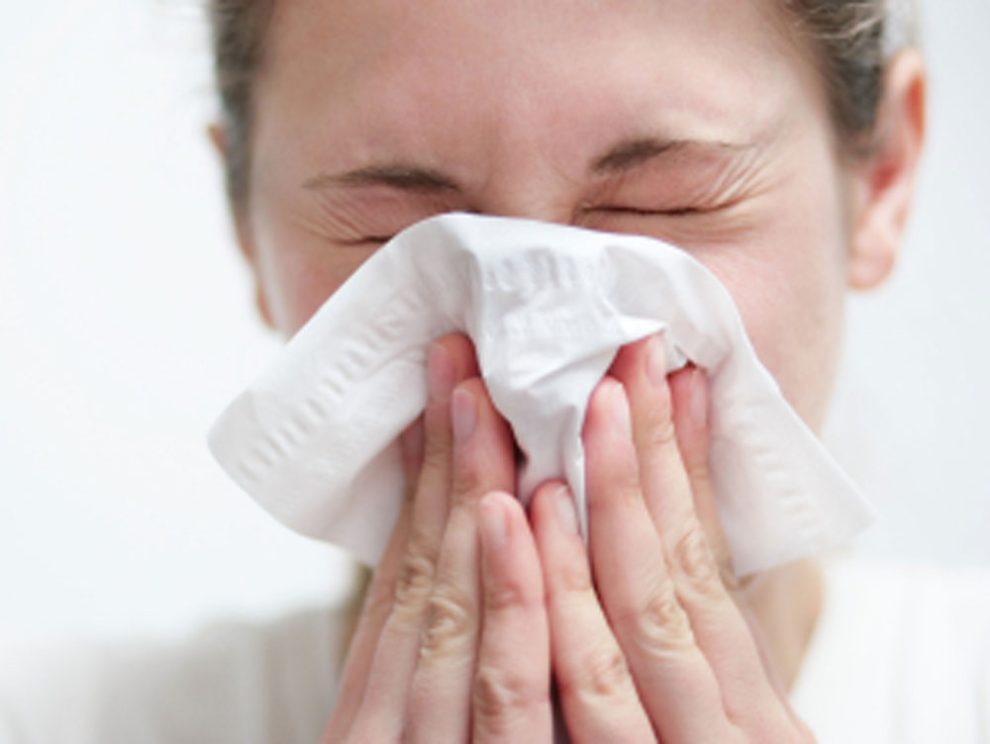 The common cold is usually caused by a virus (rhinovirus, adenovirus…) that lodges in the mucous membranes of the upper respiratory tract (nasal, pharyngeal or laryngeal mucosa). It is transmitted directly from person to person through coughing and sneezing, remaining as droplets or aerosols in the environment. It also does so indirectly through contaminated surfaces. It is usually a trivial pathology which does not require specific treatment, except for symptomatic treatment.

Characteristics of the allergy

Allergy shares symptoms with the common cold, such as runny nose, sneezing, and itchy throat (allergic rhinitis), although sometimes it can also affect the eyes (appearing itching and conjunctival tearing, called allergic conjunctivitis) or the respiratory tract lower, with bronchospasm (the bronchi and bronchioles are narrowed making it difficult for air to pass, so there are breath sounds and a feeling of shortness of breath). The cause of allergy is a reaction of our immune system to an external allergen.

If we cannot avoid the allergen?

When we cannot avoid contact with the cause of our allergy, we must take medication that mitigates the symptoms. They are called antihistamines since their mission is to prevent the release of histamine, a substance generated by eosinophils when we are in contact with something that causes us an allergy and which is responsible for the symptoms. Sometimes, when the symptoms are moderate or associated with shortness of breath, other treatments, such as bronchodilators, are required to help us breathe better.
How do we know what we are allergic to?

If symptoms of persistent or refractory allergy to treatment, our family doctor will refer us to the allergist (allergist) since he or she will be the one who can request allergy tests to find out what allergen we have symptoms against. They are performed on the skin of the forearms, placing a small concentration of the allergen in a small scratch. It is a painless test. His name is Prick test.

A treatment more focused on the medium term is that of vaccines. It is done based on the results of allergy tests. The pharmaceutical laboratory prepares the vials with progressive concentrations so that our body “adapts” to these allergens, little by little.
If my symptoms start in the spring

The initial symptoms are very similar, but here are some keys to differentiate them:

When should I see the doctor?

We will consult with the doctor when the process extends beyond four or five days when Fever appears or alarm symptoms such as difficulty breathing or affectation of the general condition or when a greenish mucus appears (compatible with a bacterial superinfection); however, if we suspect that we may be facing an allergy (the symptoms only appear under certain circumstances or certain allergens), especially for the performance of specific tests to reach the diagnosis, or when it does not improve with conventional treatment.